Cult of Mac: There’s years of muscle memory at work that tells you that when you’re on your desktop or laptop, you scroll by swiping two fingers in the direction you want to go. Doing the opposite is going to seem counter-intuitive at first.

Cult of Mac: “The reason Lion’s new way of scrolling seems so wacky at first is that after almost thirty years of using Macintosh OS, we’ve stopped associating our computer desktop as being analogous to a physical desktop, covered in pieces of paper“.

Me: Uh, actually we’ve never done that, because a computer desktop is not analogous to a physical desktop, and we all know that. It’s just a metaphor, and an outdated one at that.

Cult of Mac: “Likewise, we’ve also forgotten that a mouse pointer is supposed to represent where our finger is on that desktop“.

Me: Uh? WTF? No, it’s not. And anyway I don’t point my fingers at my real life desktop.

Cult of Mac: “Let’s think about how scrolling would work in a physical space“. 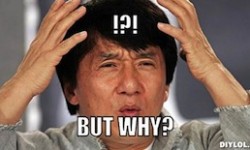 Cult of Mac: “Let’s think of a web page loaded in Safari as a long piece of paper, while Safari is a fixed wooden frame around that paper“.

Me: Browser = wooden frame? Internet = a piece of paper? Are you out of your MIND?

Cult of Mac: “If you wanted to move the paper so that words that were below the lower boundary of the frame were within its viewing pane, you would have to use your finger to push the paper within the frame’s viewing area up towards the top”.

Me: IF I were in a physical space. I FUCKING AM NOT!

Cult of Mac: “If you remember that a computer desktop is actually a GUI metaphor for a physical desktop, and virtual objects are meant to manipulated using the same physics as real objects”

Cult of Mac: “It becomes clear that OS X Lion’s so-called “reverse scrolling” is anything but. It’s actually realistic scrolling“.

Cult of Mac: “Adjust Your Thinking”

This website uses cookies to improve your experience while you navigate through the website. Out of these, the cookies that are categorized as necessary are stored on your browser as they are essential for the working of basic functionalities of the website. We also use third-party cookies that help us analyze and understand how you use this website. These cookies will be stored in your browser only with your consent. You also have the option to opt-out of these cookies. But opting out of some of these cookies may affect your browsing experience.
Necessary Sempre abilitato
Necessary cookies are absolutely essential for the website to function properly. This category only includes cookies that ensures basic functionalities and security features of the website. These cookies do not store any personal information.
Non-necessary
Any cookies that may not be particularly necessary for the website to function and is used specifically to collect user personal data via analytics, ads, other embedded contents are termed as non-necessary cookies. It is mandatory to procure user consent prior to running these cookies on your website.
ACCETTA E SALVA